Back in February, some of our students attended a Songwriting Workshop, run by our vocal coaches Meghan Kelly and Christina Stogsdill.

Christina gave us a recap of everything they learned and the workshop process:

The Songwriting Workshop was the first in our 3 part series: BUILDING AN ALBUM. We had an awesome group of students, nearly all of which had never written a song before. We kicked the morning off with each student introducing themselves and stating the musical genre(s) that they were most connected to. 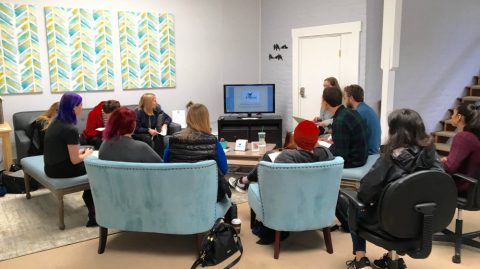 This was really helpful later when we broke into groups to write, because everyone had a partner with similar interests! Meghan and I then gave an in-depth presentation explaining song structure, the writing process, rhyming techniques & other creative aspects such as simile, metaphor, irony & attention grabbing words/phrases. Everyone listened intently and took lots of notes!

Finally it was time to put the information to use! We broke into groups & everyone began brainstorming content. The worksheets provided helped them to get their synopsis down according to the method explained in the presentation.

Meghan and I bounced from room to room checking progress, helping with chords and melody, and encouraging them to stick to the formula. It was really amazing to see how well the groups worked together & formed solid ideas.

By the end of the day, every single group had almost a full song written. They even got the chance to perform them! Every song was unique and I was extremely proud of the final results, especially with the short time period in which they had to work.

Completing a song in two hours is a huge feat, and these first time writers nailed it! I think one of the main takeaways the students has was that songwriting isn’t as daunting a process as it sounds. When you follow the formula and break it down into simple process, it comes quite naturally.

I was very pleased to see the groups exchanging contact information, eager to revise and see their songs through to the end!